"The battlefields are silent now. The graves all look the same." -- Motorhead,Voices from the War

Elizabeth Custer included the following in her wonderful book, Boots and Saddles:

"There was a Swiss soldier in our regiment who had contrived to bring his zither with him. My husband would lie on the bearskin rug in front of the fire and listen with delight as long as he ventured to tax the man. He played the native Tyrolese airs, which seemed to have caught in them the sound of the Alpine horn, the melody of the cascade, and the echo of the mountain passes. The general often regretted that he had not had the opportunity to learn music. It seemed to me that it was a great solace and diversion to officers if they knew some musical instrument well enough to enjoy practice. They certainly gave great pleasure to those around them."

Libbie was referring to 7th Cavalry musician John Burri, who enlisted in the 7th Cavalry on March 13, 1871, in St. Louis, Missouri.

Burri married Mary Haack, widow of fellow 7th Cavalryman Henry Haack, on December 8, 1881, at Fort Totten. After retirement from the Army at Fort Meade in 1885, Burri moved to a ranch west of Bear Butte where he resided until he moved to Whitewood in 1899, where he made his home until his death.

"John Burri came to the Black Hills in August, 1874. He was for many years a member of General Custer's Seventh Cavalry, part of which was annihilated in the battle with Indians on Little Big Horn, Montana, in June, 1876. Mr. Burri was not in that engagement. He resided for many years in Whitewood, near Deadwood. He died on December 1, 1927."

Mary Burri had been married twice before. First to Elisha Stuart and then to Henry Haack. She had at least one child, Catherine Stuart, who married a 7th Cavalryman herself, Jacob Horner.

Mary Burri died on December 27, 1929, in Bismarck. Her daughter Catherine and Jacob Horner, are buried next to Mary at Saint Mary's Cemetery in Bismarck, North Dakota.
Mary's obituary appeared in the December 27, 1929 issue of the Bismarck Tribune. Her funeral announcement was printed the following day.
Read Mary Burri's obituary and funeral announcement from the Bismarck Tribune.
JOHN BURRI PAGE
- October 29, 2022 No comments:
Email ThisBlogThis!Share to TwitterShare to FacebookShare to Pinterest
Labels: burri

Daniel Newell is one of the more well known troopers in the story of the Little Big Horn. He was often quoted on the action during the valley fight and later the siege on the bluffs.
Daniel Newell was a private in the 7th U.S. Cavalry and was a member of Company M. He was born in Ireland on March 17, 1847, St. Patrick's Day (how's that for an Irishman?).
"The Story of the Big Horn Campaign of 1876" as told by Private Daniel Newell appeared in Sunshine Magazine. Some of the essays dealing with the campaign were later reprinted in a small, privately printed publication, THE SUNSHINE MAGAZINE ARTICLES, edited by John M. Carroll.
One of his obituaries, this one from the Sturgis Weekly Record of September 28, 1933, said the following about Trooper Newell:
"Mr. Newell was a member of the A. O. U. W. lodge and served on the city council and the school board here for two terms.  During his many years of residence in Sturgis, Mr. Newell became universally liked and respected, counting his friends by his acquaintances.  He possessed a kindly, genial nature and high principles, and his passing will be deeply regretted."
Daniel Newell died on September 23, 1933, in Hot Springs, South Dakota. He was buried next to his wife, Mary, in Bear Butte Cemetery in Sturgis, SD.
This "new" obituary is from the Rapid City Journal of September 27, 1933. See it here.

What I Did On My Summer Vacation

Remember back in school and everyone would come back after the long summer break? Some classmates you hung out with and others you didn't see at all. The teacher would go around the room and ask everyone for a brief update on what you did over the summer break. Well, this is what I did.

I have a close group of buddies and we go hunting around battlefields, forts, and other historic sites. We also look for decent food and beer along the way. We typically try to go every other year but Covid-19 threw a monkey wrench into those plans. Our last trip was back in 2018. 2020 was to be our next but we all know what happened. 2021 wasn't any better so that was also scrapped. When 2022 rolled around we were determined to make a go of it. Unfortunately, one of us couldn't make it. That changed the whole dynamic and feel of the trip so we are setting our sights on 2023 to have all of us together and try and get things back to some form of normal.

We call our trips and group "Montana Mayhem." We all met on the internet and since our first trip we have been going strong. When we are not traveling together we keep in contact by phone calls, email, text messages, and our own private Facebook group. We're not always discussing Custer, the Little Big Horn battle, the Plains Indian wars, etc. There is lots of talk about football, beer, movies, etc. Just normal everyday stuff.

Our 2022 trip was a wide ranging trip. We all met up in Billings on June 14. From there we branched out and hit Hardin, Sheridan, Cody, Bozeman, and eventually back to Billings. We hit the Little Big Horn Battlefield, Fort Phil Kearny, the Buffalo Bill Museum of the West, the Museum of the Rockies, Big Hole Battlefield, and other points in-between. There are many small, but extremely interesting and valuable, museums and historical sites spread throughout the area. We try to visit as many as we can. And don't forget about the food and beer aspects either. Looking for the ever elusive and excellently prepared bison steak.

We are already throwing around ideas for our 2023 trip. After all, half the fun is in the planning.

Thanks to Diane Merkel of the Little Bighorn History Alliance Blog for hooking me up with a photo of John Pahl. I made a post not all that long ago about Pahl's grandson, John Albert, who was killed in action during World War II. In that post I quoted Charles Windolph, a Medal of Honor winner from the Little Big Horn fight, stating this about John Pahl:

“There were many men that day deserving medals who never got them. There was Sergeant Pahl who got shot leading a charge on the north side of the hill. A braver man never lived." 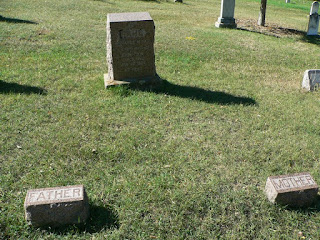 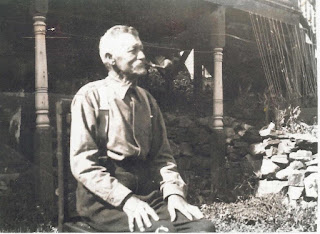 Charles Windolph was the last surviving trooper that actually participated in the Battle of the Little Big Horn.  He was born on December 9, 1851 and lived into the mid-20th century, passing away on March 11, 1950.

Windolph was very proud of the time he spent in the 7th U.S. Cavalry. He was awarded a Medal of Honor and later a Purple Heart for his actions there. He was a member of Company H and was a "Benteen man" through and through. He related variations of the following story several times during his post-cavalry days:

The Indian rifle fire had resumed and happened to be particularly fierce at the time. Benteen told the prone Private to stand up. Young Windolph hesitated, since two of his H Company comrades, Julien Jones and Thomas Meador, had only recently been killed beside him. He asked his Captain if it was really necessary that he stand. “On your feet,” ordered Benteen. Windolph obeyed. “Look at all those Indians," Benteen said. "If you ever get out of here alive, you will be able to write and tell the Old Folks in Germany how many Indians we had to fight today." -- A Terrible Glory: Custer and the Little Bighorn, The Last Great Battle of the American West; Little, Brown and Company, New York, NY, 2008; by James Donovan

The following article in from the Rapid City Journal, December 18, 1949 (click image to expand):

CHARLES WINDOLPH PAGE
- May 07, 2022 No comments:
Email ThisBlogThis!Share to TwitterShare to FacebookShare to Pinterest
Labels: windolph

John Lattman was born in Switzerland and came to the United States where he enlisted in the 7th U.S. Cavalry on October 14, 1873, in Philadelphia.

He was a member of Company G and was therefore in the valley fight with the Major Reno. In the haste to leave the valley and get to the nearby bluffs, several troopers were left behind. Lattman was one of those left in the timber after the rest of the troops made their way to the hilltops across the river. He later made it to the hilltop, possibly as a member of Herendeen's group.

He was discharged on October 14, 1878, at Fort Lincoln, Dakota, upon expiration of service, as a private of excellent character. He eventually homesteaded on 160 acres of land northeast of Rapid City, South Dakota, where he raised cattle.

He died on October 7, 1913, and was buried northeast of Rapid City in Elk Vale Cemetery.

While perusing old newspapers on microfiche, I came across a couple of mentions of Lattman. These are hardly earth shattering finds but just a glimpse into the past and one of Custer's troopers.

The first is from the April 11, 1913 edition of the Black Hills Weekly Journal. Lattman, who was living on his farm northeast of Rapid City at the time, found himself stuck and stranded during a prairie blizzard. As someone who has lived in the Dakotas all my life, I can certainly attest to these spring snow storms. They drop a lot of snow and can easily fool people into thinking that conditions aren't as bad as they really are.

The second clipping is a bit more ominous. This is from the September 30, 1913 edition of the Rapid City Journal.

On the 1876 Campaign, Peter Eixenberger was a member of the 7th U.S. Cavalry band which was under the leadership of Chief Musician Felix Vinatieri. Therefore, he was not at the Battle of the Little Big Horn, but instead was on detached service at the Powder River Depot with the rest of the band.

Peter died on September 12, 1917 near Sykes, Montana. He was buried at St. Aloysius Cemetery in Sturgis, South Dakota. Sadly, two of his children, Peter Jr. and Gladys, died the following year during the Spanish Flu epidemic. His wife, Mary, lived until 1940. She died on December 8 and is buried next to her husband.

Many thanks to Diane Merkel of the THIS WEEK IN LITTLE BIGHORN HISTORY blog for providing me with this photo.